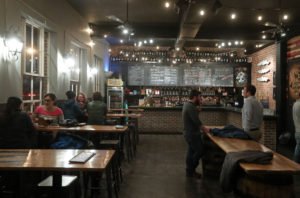 Three Notch’d Brewing Company was conceived by three friends who value great beer and great times with close family and friends. Each of us have a great appreciation for individualism, respect for hard work and earning our ability to give back to our community.

We opened our doors for commercial operation in August of 2013 and work each day to Leave Our Mark on the craft brew industry and Charlottesville.

We at Three Notch’d Brewing Co. aim to leave our humble mark in the world of craft beer and our community. To that end we are proud to support the McArthur Squash Center, Boar’s Head, and the University of Virginia Foundation in bringing the finest squash players from around the world to Charlottesville for the WSF World Masters Squash Championships.

As a proud sponsor of the championships, our tap beer will be made available on site at Boar’s Head to all tournament competitors, at generously discounted prices, and we are looking forward to hosting the tournament’s opening reception in our brand new brewery and tap room on Saturday July 28.