The 2016 WSF World Masters saw the introduction of the Nations Cup, giving players the ability and incentive to earn points for their countries in the Large and Small (by number of entries) categories of the event. 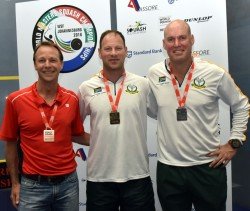 Points are earned for positions in the last sixteen onward, with Gold, Silver and Bronze medals obviously earning more points, but every effort counts.

The final points tally after yesterday’s finals – with 183 players contributing – put hosts South Africa at the top of the Large Nations table – helped by clean sweeps of medals in the M40 and W40 categories – while Scotland, despite not winning any Gold medals,  took the prize in the Small Nations division.

Here’s the final tables, and below them a recap from the Nations Cup mastermind Richard Millman. 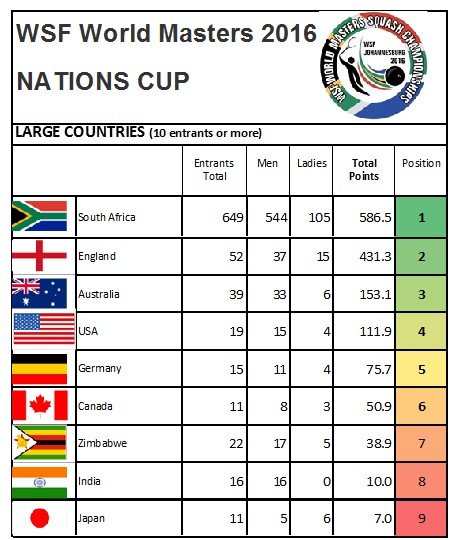 Nations Cups in the balance on last day in Johannesburg

The concept of the Nations Cup is that all members of a national team can contribute to their Nations success.

The Nations Cup is about every member of every team having the opportunity to contribute toward winning something for their country together with the elite players and as such, I believe is likely to grow the game, the camaraderie, participation, financial security and longevity of our sport.

In the Large Nations Cup, to ensure that a country with a large entry couldn’t just sweep the Nations Cup with numbers – their is a formula in place such that last 16 losers in draws of 33 or more players and losing Quarter finalist are awarded 8 and 10 points per person and then the team total is divided by the total number of entrants from that country.

On the last day 7, 5 and 3 points were available to the winners of the Special (Classic) Plate, Plate and Consolation Plate winners respectively and 12, 15, 18 and 25 points available to 4th place, Bronze, Silver and Gold respectively.

The possible points totals were open to dramatic variations depending on who won and lost on the last day and the plate winners had the capacity to tip the balance even where a medalist lost in a 3/4 or final.

In the small nations event there was no formula as it is only for teams of 9 or less and so what you won was what you got.  Clearly Scotland were absolutely thrilled at their combined team effort that, despite not winning any Golds, saw them take the trophy! 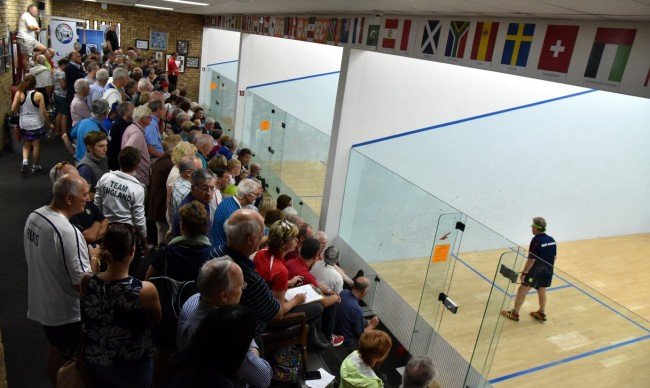 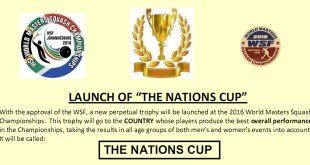 A new perpetual trophy will be launched at the 2016 World Masters Squash Championships ...