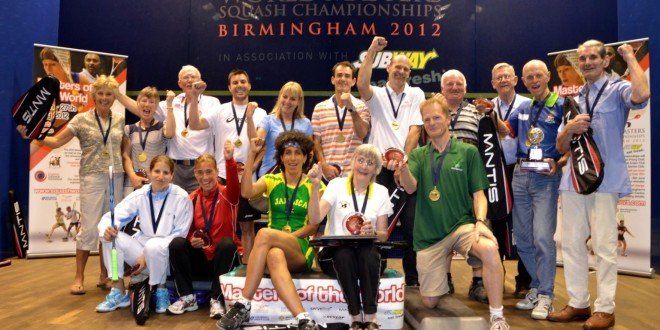 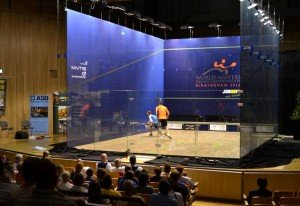 The 2012 World Masters Squash Championships in association with SUBWAY reached a climax as eighteen players were crowned World Champions, including five titles won by English players, after the week long international event.

More than 750 competitors from 47 nations competed for the prestigious titles across age groups ranging from Over 35 to Over 80, with thousands of matches taking place across Birmingham throughout the week, including finals on the state-of-the-art glass showcourt in the Bramall Music Building at the University of Birmingham.

The 2012 Championships, for the first time in the history of the tournament, included an Over 80 category. South African Peter Fahrenheim took the historic first title and an incredible fourth World Masters title, with a 3-0 victory against Scotland’s Alex Hamilton.

“I felt a bit lucky! No, I was fortunate to catch Alex on an off day. I watched him on Tuesday and thought I didn’t stand a chance of beating him. It has been a fantastic tournament and a pleasure to be involved,” said Fahrenheim.

English players dominated the Men’s Over 70 and 75 categories, with Adrian Wright and Pat Kirton victorious for the home nation whilst there was also an all-English final in the Women’s O65 with unseeded Ann Manley playing a faultless tournament to take the title against Worcestershire’s Bett Dryhurst. 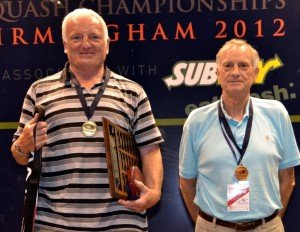 Newly crowned Over 70 champion Wright commented: “It was a very tough game, I thought for a moment he was going to come back in the third, so pleased with the win though.”

Women’s O65 Champion Manley added: “I had a difficult match considering my racket completely snapped in the second game! I was ready to get it restrung for the fourth but fortunately this wasn’t required. It was a very tight game despite the 3/0 score line.” 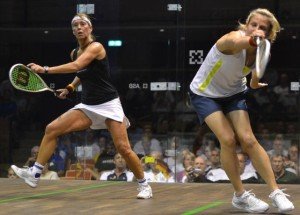 The Women’s O45 was an all-Aussie affair with former World Champion Michelle Martin managing to clinch a 3-1 victory against teammate and friend Sarah Nelson.

The 45-year from Sydney commented: “It’s always great to win but it’s amazing to catch up with some old friends. Some of them I’ve not seen in years so that’s the best part for me.”

In the Men’s O45 number one seed Craig Van Der Wath proved to be just too strong for England’s Yawar Abbas who was in his first World Masters event, winning 3-0.

The South African said: “Playing Yawar is tough and I’ve managed to beat him today and defend my title. I know Yawar so well, he’s a good friend, and we’ve played in a league together for many, many years and I always enjoy playing against him. Delighted to have won today and happy with the way I played.”

Yorkshire’s Julie Field claimed the Over 55 title after an incredibly close match against Australian Anne Richards. Field was 2-1 down before clinching the fourth 12/10 to take it to a fifth, in a tense last game Field managed to remain composed, taking the game 11/9.

There were a few surprise winners with unseeded Jamaican Susan Lawrence coming out on top in her final against Zimbabwean Theresa Elliot in the Women’s O50 and Cayman Islander John Macrury beating home favourite Keith Jones in the Men’s O60.

There was more good news for the host nation in the Men’s O65 as Philip Ayton justified his number one seeding with a 3-1 victory against Welshman Brian Philips. 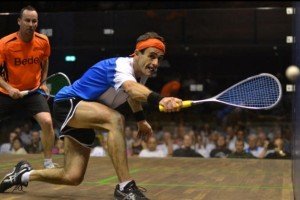 Manchester’s Nick Taylor couldn’t manage another upset in his O40 final against Craig Rowland. Two games down, Taylor battled back to win the third 11/5 before his opponent found his rhythm again to take the Men’s O40 title back to Australia.

The tournament concluded with the Men’s O35 with second seed, the talented Renan Lavigne, up against German Stefan Leifels – whose route to the final included beating the number one seed. 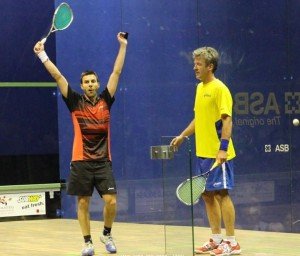 The first was a close affair, with players going shot for shot and point for point, with the game going to extra points, the Frenchman managing to hold his nerve edging it 14/12. Leifels picked it up a gear in the second, some wonderfully long rallies being finished well by the German allowing him to level at 1-1.

Lavigne was not to be beaten today though, and got back into the game in the third, then started to dominate proceedings taking the third 11/7 and fourth 11/8, giving the Frenchman a well-deserved Over 35 World Masters title.

The ecstatic winner commented afterwards: ““I expected a tough battle against Stefan in the final and that’s exactly how it was. As you saw from my celebrations after the last point, I am extremely happy to win the title.” 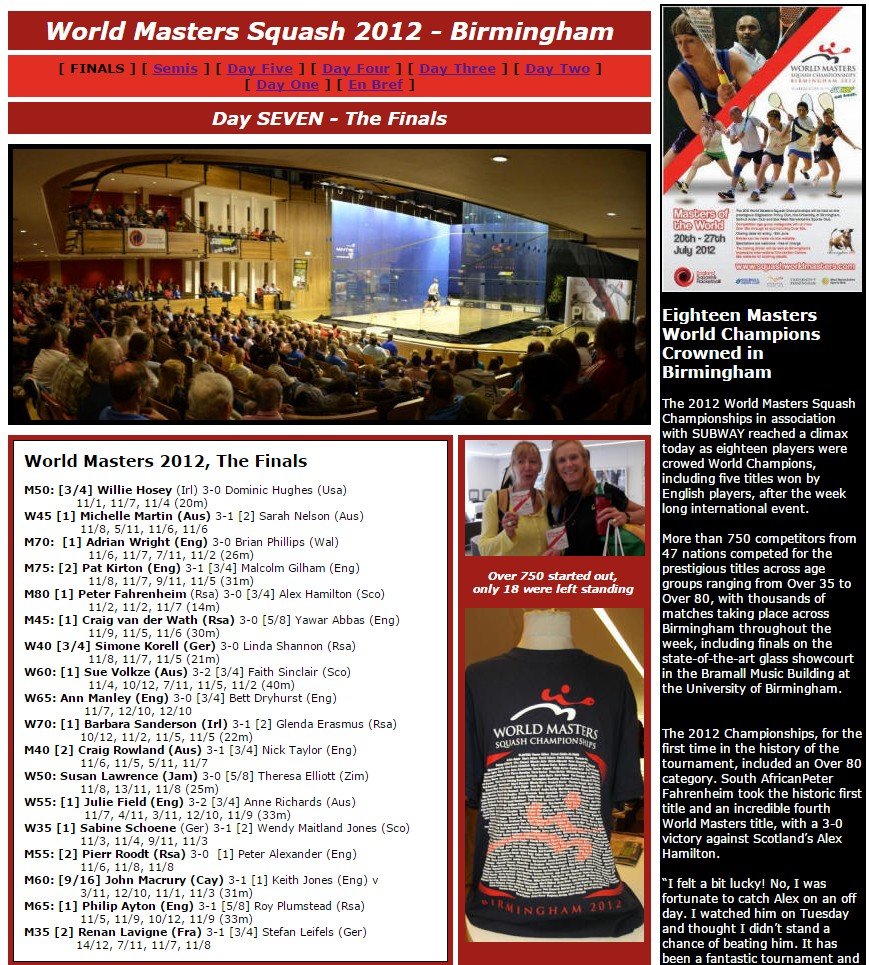