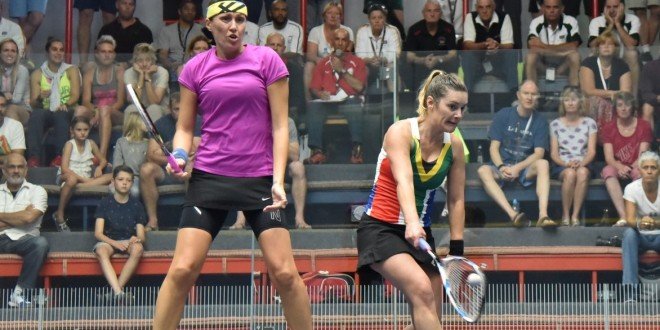 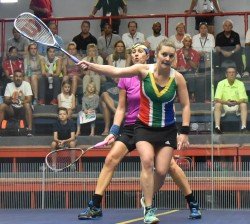 Action continued at the three venues with quarter-finals in some of the women’s draws while most of the larger draws saw pre-quarterfinal matches to determine the last eight.

“It’s my first World Masters,” said a delighted Schulz, seeded 5/8. “What an opportunity to play an experienced and top level player like Karen on my home turf. I’m delighted to win and just hope I can keep it going now.” 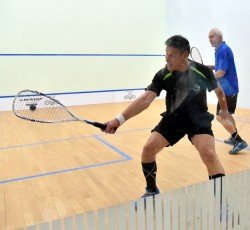 Meakins was one of three top seeds to lose today – in the M65 at Parkview’s Australia’s Brian Cook, defending champion and winner of four WM titles, was beaten in straight games by South Africa’s Arthur Dyason, a 13/16 seed.

“This is my fourth World Masters, and I’ve never gone beyond the quarters before,” said Dyason.

“I’ve trained hard for this event and I’m only just into the age group which maybe gives me an important extra half-inch of reach! I didn’t expect to beat a player like Brian in three games, but maybe the altitude affected him more than me.”

Also at Parklands, W50 top seed Angelique Clifton-Parks lost out in a five-setter against Frenchwoman Mylene de Muylder, the 5/8 seed clinching a famous victory 16/-14 in the fifth. 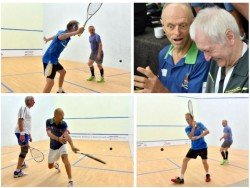 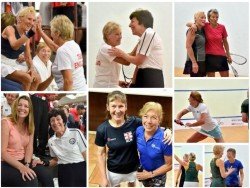 Another tournament organiser lost out as Jean Grainger, the defending W70 champion, lost in straight games to English top seed Ann Manley, one of several British women to progress to the semi-finals, including W65 second seed Bett Dryhurst who squeezed through 13-11 in the fifth against local Sheena Worwood. 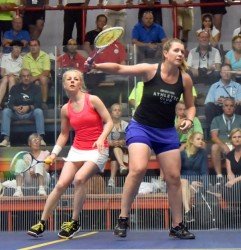 The youngest women’s age group quarter-finals, the W35,  were played out at the Wanderers, with a third Grainger, top seed Natalie, starting proceedings with a three-game win over England’s Selina Sinclair.

“It feels great to be playing in South Africa again,” said the US-based former world number one, “although Parkview is my real home club! 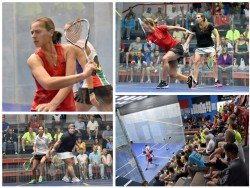 “It was so fast on there today, I just had to play length to get used to it, so I was happy to get through in three games.”

Grainger and second-seeded Englishwoman Lauren Briggs both meet South African opposition in the semis after wins for Liesl Claxton and Jacqui Ryder.

Tomorrow sees the quarter-finals of the larger draws and semi-finals of some women’s categories.

Action takes place at all three venues, but with 18 matches on the Wanderers showcourt, that will be our main focus. 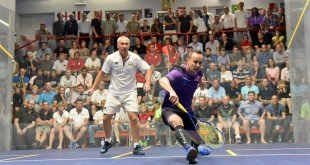